A quick follow-up on my last Exxon post (here) where I argued that oil company valuations reflect a bullish outlook for the oil price, i.e. they need way higher oil prices to make fundamental sense.

In today’s FT article (here) on Statoil’s USD 2.3 billion asset write downs, we get more information on what seems to be industry practice,

This forced the group to reduce the valuation of its oil and gas reserves, prompting the impairment which caused an unexpected fourth-quarter loss.

As of writing the 2020 Brent forward price is about USD 56, i.e. close to the spot price (I have no data on the 2030 price), which means that Statoil is using an expected value that is 40 percent above market prices to justify its asset value. Moreover, the effect of the expected oil prices on (DCF) valuations is not linear: given that Statoil is a relative high cost producer, it might well be that at market forward rates a lot of its reserves are not viable at all (hence only option value is what’s left).

Although you can always argue that forward prices are not an unbiased predictor of expected prices (at least when it comes to purely financial assets), I still find it somewhat aggressive to deviate that much from observed market prices.

How is that possible?

Whereas it is not uncommon to see auditors twist objective criteria in favour of large clients, I do not think this is what happened here. I truly believe the auditors even acted in good faith and felt comfortable with their decision. This is because I observe a kind of bullish oil mentality out there, not only among market participants (here), but among laymen (such as the auditors) as well.

For instance yesterday, there was a report on Austrian TV on a new regulation prohibiting households from using oil heating systems in new buildings because of environmental concerns (It is apparently environmentally friendlier to burn the forests). The problem of course is that at current prices oil heating is quite competitive. The journalist (no doubt, in favour of “sustainable energy”), however, concluded the report with a confident tone, “…who knows how long this will last?”

This made me think about where this confidence, i.e. bullishness comes from.

And I think I have found the answer: peak oil!

Never mind that the apocalyptic predictions have (spectacularly) not materialized for decades, oil is a finite resource and for most people this fact translates into visions of oil shortages and spiking prices.

But the question that matters is not whether oil is finite in a physical sense, but how its potential supply compares to potential demand over an economically relevant time period. Price reflects of what human actors a willing to pay to satisfy subjective current or future needs, whereby future needs are discounted using time preference curves (here). Time preference is the reason why events in, say, 30 or 50 years should have little impact on today’s price action and cannot be used as an argument in explaining the price action of the next 5-10 years.

So, how likely are we to run out of oil in the foreseeable future?

Not very much, according to this chart taken from BP’s global energy outlook (here), 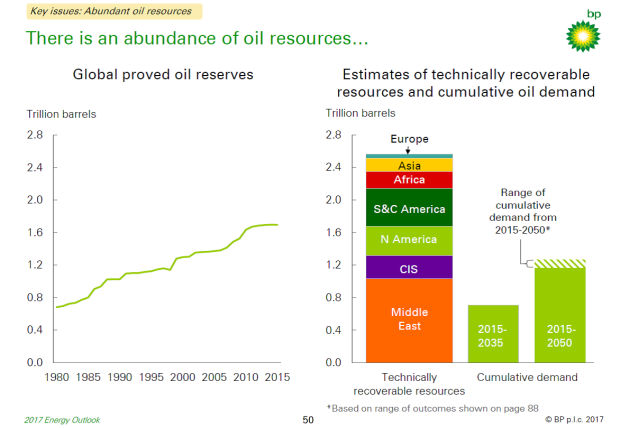 As one can see global proved oil reserves have continuously increased over the last three decades, to the extent that estimated cumulative demand over the next 35 years is more than twice covered by technically recoverable resources. Of course not all these resources are profitable to extract at current oil prices, but their existence certainly puts a cap on how high oil prices can get. Moreover, the entire estimated cumulative demand (base case) is covered by oil reserves in the Middle East and the former Soviet Union which are low-cost conventional oil fields and highly profitable at current prices.

And lest anybody accuses BP of not being bullish enough (that would be weird, wouldn’t it), here is at how they arrived at their base case demand estimate,

Rising demand from China and India seems to be a safe bet, rumours about capital flight and bad loans notwithstanding…

In summer I argued (here) that integrated oil majors look overvalued and require much higher oil prices to justify current valuations. I was especially puzzled by the fact that Exxon had not written down any of its upstream assets, despite a significant drop in the oil price over the preceding 24 months, something that even had attracted the scrutiny of the SEC.

Well, yesterday Exxon missed forecasts by a large margin, due to impairments (USD 2 billion) on some of its gas fields, which makes it the 9th straight quarter of yoy profit declines. Clearly its fortunes correlate heavily with the oil price. This, however, is missed by the wider analyst community, whose average earnings estimate was almost double the actual result.

And it gets worse.

For, if oil prices stay at current levels, Exxon might be forced to de-book almost 20 (!) percent of its reserve assets, as extracting oil from them has become unprofitable. From Bloomberg (here),

About 3.6 billion barrels of reserves in the Canadian oil sands and the equivalent of another 1 billion barrels in other North American fields could fall off the company’s books if low energy prices persisted, Exxon said in October. That would equate to 19 percent of Exxon’s reserves and would be the largest de-booking since the 1999 merger that created the company in its modern form. Woodbury said an undefined portion of those revisions would be offset by new additions.

Yeah, an “undefined portion” will be replaced by new additions. By the way, production volumes were down 3 percent over the year too.

I do not know about you, but to me Exxon looks like a shrinking business.

Management seems to agree. It is management planning to increase capex to USD 22 billion for 2017, an increase of 14 percent compared to the past year, and equal to the entire “cash flow from operations” of 22 billion for 2016, according to page 19 of the most recent SEC filing (here), increasing the probability that shareholder distributions have to be paid out of debt. Jim Chanos’s “liquidating trust” hypothesis certainly doesn’t look far-fetched to me (here).

The market (ETFs) seems to disagree, however, and thinks that Exxon at a TTM PE of over 40 is a bargain. As does the Swiss central bank, for whom EXXON and Chevron are among the Top 15 holdings together worth more than USD 2 billion.

All the investors in oil majors are betting on a significant recovery in the price of oil. With so much illusory wealth  (add the heavily indebted shale plays as well as suppliers) depending on the trajectory of a highly volatile commodity, one can see why markets get nervous when oil goes down.