Here are the most interesting quotes,

Yield-hungry bond investors sucked up a lot of the debt that was issued and now hold about $2.1 trillion of outstanding notes. They’ll be first to feel the pain considering Standard & Poor’s has already downgraded securities equivalent to 47 percent of that amount and made some 400 negative-ratings moves in the basic materials and energy sectors over the past 12 months alone. Such scale and depth is reminiscent of the way banks were slaughtered by ratings companies during the 2008 financial crisis.

It’s unclear where the other portion of the $3.6 trillion in liabilities lies but probably, most of it is owed to banks. If the remaining $1.5 trillion is indeed on the balance sheets of financial institutions, that would represent about 1.5 percent of the total assets of all the world’s publicly traded banks. That doesn’t seem very significant, or any cause for concern. But to put it in some context, U.S. subprime mortgages represented less than 1 percent of listed banks’ assets at the end of 2007.

1.5 percent of listed banks’ assets is a significant amount given equity ratios of about 5 percent on average, and taking into account that the bad loans from the previous crisis have not yet been dealt with (curtesy of low interest rates), as evidenced by stubbornly high NPL ratios across Europe.

Also do not forget that these loans are not evenly distributed, but on the books of banks with close connections to the commodity industry. The average doesn’t tell the whole story. Since the modern financial system is based nothing but confidence, one can see how one major player’s difficulties can translate into a financial crisis.

Make no mistake: the comparison with subprime is well deserved,

Five years ago, those companies tracked by Bloomberg had more operating income than debt, on average. Now, it would take them more than eight years’ worth of current earnings, without provisioning for interest, taxes, depreciation or amortization, to clear their combined net obligations.

An average net debt/EBITDA of 8.1 means these are really bad credits. The average energy loan is well worth less than par. Especially since depreciation is a very real expense in an industry where assets deplete rapidly…

One can see the potential…

There has been increasing coverage on China’s capital flight problem over the past few weeks. The press love a good story and it has become one after statements by a few well-known hedge fund managers on shorting the Chinese currency have triggered an angry response by Chinese officials. This FT article pretty much captures the mood,

If currency investors were in any doubt over how to characterise the renminbi’s rollercoaster drama last month — a scuffle perhaps, or a skirmish — then China’s ruling Communist Party made it clear: this is war.

Last week the Chinese party mouthpiece, the People’s Daily used a front-page editorial to warn hedge fund manager George Soros off a fight over the renminbi and the Hong Kong dollar in a piece titled “Declaring war on China’s currency? Ha ha”.

So the PBoC is fighting speculators putting pressure on the Yuan peg. No man, no problem.

But, what if those speculators are less important than commonly thought?

Worse, what if “capital flight” has less to do with classic capital flows, i.e. the capital account, but is a result of activities in the “real economy”?

Then fighting those speculators is pointless.

And this is precisely what this brilliant post (h/t: FT-alphaville) is saying. You have to read the full piece, but here is the most important takeaway,

The chart above that depicts China’s gross current account statistics. This is an unusual sight, as we usually only look at the net numbers such as surpluses or deficits. Looking at the gross figures, one can see that the export and import flows (leftmost bars) dwarf the amounts on the capital account side, i.e. those that are labelled “capital flows”. In other words: they are the “real thing”, not the speculators.

The author argues that by looking only at the net number, the trade surplus/deficit for instance, as a proxy for hard currency inflows, one implicitly assumes that all FX earned through exports is converted to the local currency (i.e. leads to an equivalent rise in FX reserves), whereas all exports have to be paid in FX (i.e. are a drain on reserves). This is a big assumption.

There have been rumours of how the Chinese use invoicing tricks to circumvent the capital controls for a long time. Indeed, I have shown in my last post (here), that the use of CNY outside China (offshore deposits) has indeed increased massively over the last five years thereby implying that not all imports have to be paid in FX, but that this is rather a function of appreciation/depreciation expectations.

The author goes on to show how the conversion ratios for imports and exports have developed over the years, 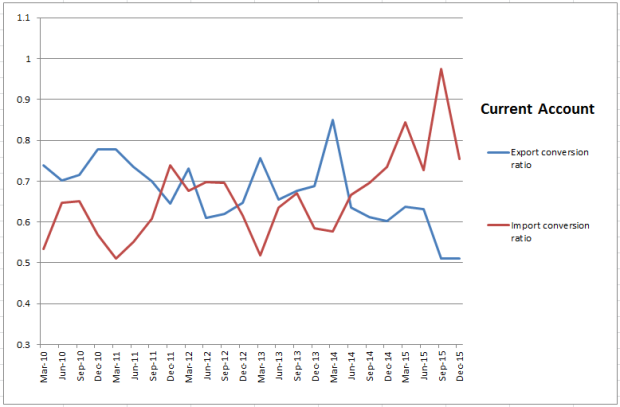 And the result is very interesting (at least for me): around the beginning of 2014 exporters have decided to swap less FX into CNY, just as exporters to China have increasingly insisted on being paid in FX (rather than CNH). Not for nothing have those offshore deposits (see here) peaked around the same time. In short:  there must have been a shift in expectations long before the PBOC devalued the CNH this summer.

As I said, pretty interesting; and to a large extent outside the control of the PBOC as it cannot influence the preferences of exporters to China on how they want to get paid.

Now, do I feel more confident that my trade will work out in the near future?

Unfortunately, the answer is no and it has to do with this statement from the above mentioned FT article,

(…) Name me a US hedge fund that isn’t short the renminbi still,” says one Asia-based strategist. “They all have to be — their investors expect it — even if they’re not sure what will happen next (…)

I do not want to sound too cynical, but there is no way that a lot of hedge funds will profit from this trade – markets simply do not work like that.

So I don’t expect a devaluation before 2017…