As you are aware, the situation in Greece is not getting any better. This chart shows the evolution of Greek bank deposits over time, 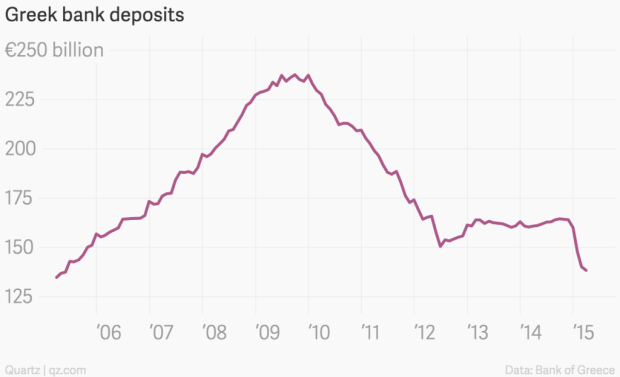 This is ugly: deposits have fallen substantially since November when I had my discussion (here) with David Einhorn about Piraeus bank. This should add substantial funding pressure for the banks. Obviously, it is out of question to “grow your loan book” in such an environment.

One of the arguments we had been about the cost of funds, here is what David had to say,

(…) The 2.04% is the cost of new time deposits in August 2014. This is not the average cost of deposits in the Q2 2014 financial reports, which was 2.62% according to the same presentation (and 2.71% in Greece time deposits). This cost will reduce down to the new cost of deposits over the 1-2 quarter duration of the time deposits. So even without any additional lowering of deposit pricing you would still expect to see a near 60bps improvement. This is obviously very material given there are €29.6bn of time deposits (the rates are also coming down on savings and sight deposits but this is much less relevant). The 60bps is worth close to €200m of additional annualised PPI, compared with the €1.2bn annualised reported PPI in Q2 2014. How low can deposit rates go? Time will tell of course but rates in the other periphery are around 1% and the management teams of the Greek banks are clearly trying to reduce them towards this level. I would suspect another 50bps (…)

So the average cost of new deposits was 2.04 percent in August 2014. Out of curiosity I looked up deposit rates Piraeus bank currently offers clients who want to open an account (here).

And what do I see?

Rates range from 0-1.4 percent – lower than in August 2014!! (I note that they offer a multitude of complex products, presumably to con their clients akin to mobile companies).

To sum up: a substantial drop in supply (of deposits) has not caused any increase in the price of funding. Given that the balance sheet of the Bank is more or less unchanged, we can rule out a commensurate drop in demand (for funding).

Do we need to rewrite economic theory? Is this some puzzle, something which has an unorthodox answer? Maybe rates stay low because there is a lack of profitable investments in the Greek economy? Maybe it is inflation expectations?

Rates are low because Piraeus bank does not have to bother about funding. There is a (very) large market player who does not make economic decisions and happily supplies any amount of funds needed. Market participants have an expression for that: dumb money. You know who I am talking about, 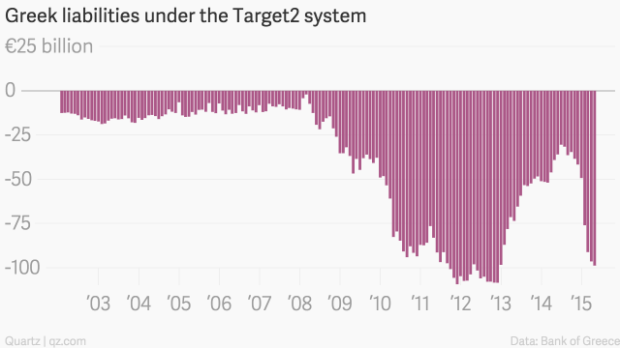 Deposit rates in Greece are low because the ECB (technically the Greek central bank) provides any amount of funds needed. There is no need for Greek banks to attract funds or keep costumers.

Now, the interesting thing is that any day that passes with deposit outflows (and higher ECB credit lines) the negotiating position of Varoufakis and Tsipras (who have made ludicrous promises to the electorate) improves. Why, that’s what I wrote in another post in February (here),

(…) Or take the ECB. A write-off would finally make it clear that it has engaged in government financing, although explicitly forbidden by EU contracts. This certainly would mean the end of the fiscal union debate. As someone who is tired to see government economists and “quality” newspapers argue for that nonsense, I would highly welcome such a development – even if I am aware that it would lead to a big economic and political crisis. (I confess that am a fan of the German proverb: “Besser ein Ende mit Schrecken, als Schrecken ohne Ende!”)

And this is exactly the reason why a write-off will never happen, as long as extend and pretend works. The accounting of government is opaque for a purpose. It has never been otherwise. If you do not believe me, read this book, it will cure you of any illusions you might have (…)

That’s right, even though the Eurocrats certainly dislike the two Marxist lunatics who make fools out of them, and even though the Greek economy (or the fate of ordinary Greeks) do not matter at all to them, they try to avoid a (formal) default at all costs, otherwise there is a rude awakening in the electorate in the core countries. And the costs are increasing by the day…

Although many predict this weekend could bring capital controls and the like in Greece, I do not think anything will happen. Instead, we will see further extend and pretend. Do not forget that a default would come at a very inopportune time now that the (of course independent) EU top court has decided that the purchase of government bonds is not government financing (here). This is probably a bold statement given current headlines, but I will stick to it.

Let me be clear: I am NOT predicting this can or will go on forever, or that the parties involved can “solve” the Greek problem. Surely, at some future point in time some kind of shock will occur, I just do not feel it is time yet. And aren’t market crashes more likely to happen in autumn anyway?