According to the latest figures by BNP Paribas (via Ft-Alphaville), capital flight from China has gathered pace during the first quarter 2015, coming in at an estimated USD 320bn annualized (vs USD 244bn in 2014). Here is the chart,

(Note: In my last post (see here) on this topic I apparently underestimated the total for 2014 (USD 100bn vs 244bn). It seems I made a mistake adding up the yellow bars in the chart in my post.)

As a consequence of the outflow, Chinese reserve assets are decreasing which is shrinking the money supply in China (and is deflationary on the margin). This explains the seemingly paradoxical attempt by the Chinese authorities to ease credit conditions, while trying to cool the housing market at the same time. From the article,

They are estimates obviously, but still, those are big numbers. And, while it’s probably true the PBoC is reasonably chilled so far, this is another clear and ongoing reason for its defensive easing policies.

As an Austrian I agree with this statement, however I am skeptical as to the ability of the Chinese authorities to control this process (and would not be chilled about that at all). The reason is simple: The Chinese authorities technically can only reflate in CNY, whereas the outflows are occurring in USD – a big difference. Just have a look at the following chart, 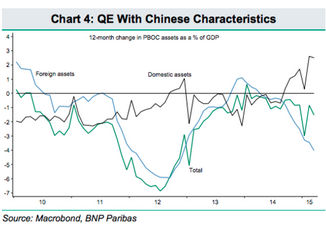 As can be expected: foreign (read USD) assets (blue line) have been shrinking for the past twelve months, whereas domestic assets (black) are increasing thereby dampening the shrinkage in the local monetary base. And true, as long as the effect is contained and the majority of market players believe the peg to hold, an increase in CNY money can offset a decrease in USD money supply. However, there is a limit to that as much depends on the perception of CNY stability. And with Chinese foreign debt likely exceeding USD 1 trillion, a reduction of USD availability in China might well lead to a scramble for USD liquidity (see also my post here) among Chinese debtors.

Of course, the Chinese may well decide to default on their foreign obligations and a lot of them certainly will not hesitate to screw foreigners, but this merely means the deflationary effect is exported.

Another interesting aspect of Chinese capital flight is to think about the recipient countries.

Apart from the obvious candidates Singapore and Hong Kong, I believe Chinese capital inflows have affected Canadian and Australian real estate markets disproportionately. For instance, I would be surprised if the exponential increase in housing “investment” in New South Wales (NSW i.e. Sidney, see right chart below) were not due to Chinese “investors”, i.e. flight capital.

More importantly, it is not only real estate that is affected, but the inflow no doubt also pushes up the value of the CAD and the AUD on the margin. Demand for them paradoxically increases, although the fundamentals causing the capital inflow mean the prospects for the economies of these commodity currencies are weakening.

Persistent capital flight means USD monetary conditions are tightening in China and the possibilities of the authorities to counter this effect are more limited than commonly understood. These flows also hint at fundamental changes in China, which weaken the fundamental value of currencies whose economies depend on Chinese demand. Paradoxically, for currencies of countries such as Australia that are major recipients of Chinese flight capital, the worsening economic picture in China has not yet been fully priced in, allowing me average into my short position.