With the rumours about Chinese capital flight increasing, I thought it might be helpful to repeat my analysis for China. China’s currency peg is unlikely to reflect the true market value which, in the case of an overvaluation, provides an incentive for capital to flee the country. Thankfully, I have come across this chart that neatly summarizes the relevant flows.

The chart confirms the observations made in my last post: reserves are indeed falling (red line). But more interestingly, NEE (yellow) was negative for the last three quarters and unexplained outflows totalled approximately USD 100 billion for 2014. That’s way higher than the Russian figure even adjusting for GDP. An outflow of that size means a pretty significant reduction in the monetary base (capital flight traditionally takes place in the form of cash) and leads to a contraction in credit outstanding. If you assume a money multiplier of 10, it means that USD 1 trillion of potential credit could not be granted. One can see how this matters even in the context of China’s huge reserves.

NEE trends can be a very useful predictor of currency peg breakdowns as shown in the following chart (chart via the IIF here). It shows the historic NEE for Russia and Argentina. 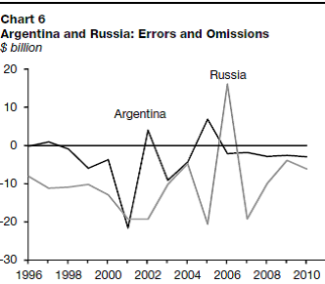 As you can see, watching Argentina’s NEE could have warned you about things to come. The same holds for Russia, where capital flight was a huge problem, especially during the period of a managed FX-rate regime.

Of course, China is not Argentina. It has a positive current account and a positive external investment position. Still, I will be watching this data coming out from China and if this state of affairs persists, the peg might come under pressure soon.