Interesting developments are taking place in the Chinese Yuan market. Talk about an impending devaluation is increasing and my out of the money CNY put option that was already completely written off only a few months ago, has come back to life as implied volatility is rising. I have written about my bearish stance on all things China related repeatedly on this blog.

Pressure has only intensified in January as the appreciation of the USD has sent China’s real effective exchange (via David Stockman, read the whole article) rate to a record high. USD strength comes at the most inopportune moment thereby hitting exports and margins at the same time that its insane fixed spending spree is coming to a halt.

There is more to it, however. As the following chart shows (via FT-Alphaville) the Chinese Yuan has been trading at the upper end of its trading band for the better part of 2014.

After all, it’s well known that China has the world’s largest FX-currency reserves as a result of running persistent current account surpluses helped by a currency that has been kept deliberately undervalued. This “war chest” virtually assures that there cannot be a currency crisis as the Chinese authorities have more than sufficient means to defend the peg. Therefore it doesn’t make sense to bet against the Yuan – you cannot break the Chinese central bank (PBOC). This is the familiar narrative.

Turns out, the story is only half-true. I have always doubted whether China’s capital account has been that closed after all. It is difficult to square all those rumours about the CNY carry-trade, Chinese real estate “investment” in Vancouver and Manhattan as well as Macau’s gambling revenues (5x Vegas!) with a truly closed capital account or a Chinese fondness for gambling.

Is there a way to access the dimension of those capital flows?

Under an “open current account” /”closed capital account” – type of policy, changes in FX reserves over time are a function of current account surpluses/deficits since only trade related flows are allowed. China has officially had just such a regime augmented by the possibility of foreign direct investment (FDI) flows. In order to see whether China’s reserve development corresponds to theory, I have compared China’s actual FX Reserves to what would have happened if indeed only trade and FDI flows had occurred. For the purpose of illustration I have charted the development below (the yellow line stops after 2013 as I could not find FDI data for 2014). 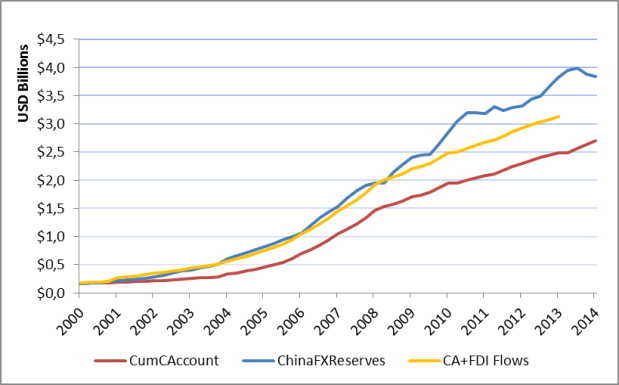 I find the result quite telling. As you see, theory and practice matched quite well in the beginning as current account surpluses and FDI flows almost entirely explain the FX-reserve development. But at the end of 2009, in the aftermath of the financial crisis and the beginning of fed QEs, this relationship breaks down somewhat and FX-reserves swell even more than what could be expected by FDI and trade flows. The difference looks small in the chart, but it is material: at the end of 2013 it amounted to more than USD 650 billion (it might have fallen somewhat during 2014, but due to a lack of FDI data, it is difficult to tell). This is strange and should not be the case and I am not aware of any policy shift that took place. (Add to this the fact that a lot of capital flows are hidden in the trade data due to over- and underinvoicing of export/import receipts and the speculative flows could be even larger).

“Fine, so they have even more FX reserves they can use to defend the peg – what’s the point?” you may ask.

Well, first, if those USD 650 billion have been able to enter the country circumventing capital controls they also might leave the same way, suggesting that the PBoC might not be entirely in control of its capital account. This might already have started. Note that FX reserves (blue) have been falling slightly since mid- 2014, which could explain the recent pressure on the currency

Second – and many observers forget this – FX reserves are mirrored by liabilities. In the case of central bank reserves, the liabilities go under the name of monetary base. The increased monetary base has underpinned China’s reckless debt growth (again, read David Stockman’s article on that). In other words, a sustained outflow of reserves might trigger a deflationary contraction in the monetary base and result in a credit deflation, unless accompanied by an increase in monetary velocity. Unfortunately, velocity is very difficult to control – just ask the Fed. Should this unfold, Lehman would ineed look like child’s play.

The CNY has been underpinned by huge monetary inflows over the past fifteen years. Whereas it is difficult to forecast how China’s current account will evolve, I think it is a safe bet to assume that FDI flows will slow. For one, the increase in the real effective exchange rate has harmed China’s status as a low-cost producer. But more importantly, the new government seems determined to reduce foreign company’s profit margins thereby rendering the country unattractive to invest. However, the biggest danger lurks in those hidden capital flows that might reverse course and put the Chinese authorities in front of an unpleasant choice: either risk debt deflation, or scrap the peg and devalue. I have crudely estimated those cumulative flows at about USD 600 billion. If memory serves me well, that’s equal in size to Lehman’s balance sheet before it defaulted…