I am grateful to reader IAthinker who commented on my recent Pireus bank post providing a link to David Einhorn’s presentation he gave at the recent Robin Hood conference, an annual gathering of Hedge Fund managers. At the conference, Einhorn reiterated his bullish stance on Pireus and Alpha bank, two of the biggest banks in Greece. As regular readers know, I have always wanted to understand Einhorn’s (Seth Klarman and John Paulson are long this stock too) thesis and I read the presentation with great interest.

As most presentations or writings by Einhorn they are fun to read, full of interesting charts and thoughts. He starts with the bullish case (40 slides) for Sun Edison (SUNE) – a solar company he thinks undervalued. The next 40 slides are reserved for the Greek recovery and said bank investments. He finishes by noting that France is in a mess and its bonds overvalued.

To sum it up: the solar case sounds interesting and I agree 100% with him on France. I disagree, however, with his bullish view on Pireus bank. In the following analysis I will present my view on the main bullish points made by Einhorn. Since this is a lengthy post, I have decided to divide it up: The first post analyses his macroeconomic arguments, whereas in the second post I proceed to the microeconomic, i.e. bank specific aspects of the case. For that reason I will not follow the order of the arguments in the presentation, so do not be confused.

At the beginning, David Einhorn points out how the hard reform measures the Greek government has undertaken, such as slashing the minimum wage and reducing pensions, have increased competitiveness and improved business climate, a fact which has been duly mentioned in the World Bank’s  recent “Doing Business Report” (via. Klaus Kastner’s blog). According to the World Bank, Greece has improved its ranking by 40 notches since the beginning of the crisis, albeit it still ranks at the bottom among EU countries.

Einhorn underlines his argument by pointing at charts such as this one: 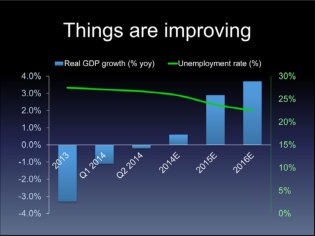 Now, if you ask me, the chart still shows a contraction in the actual figures with unemployment (a lagging indicator!) merely levelling off, not improving! All the positive figures are merely forecasts. And we all know that most government/IMF forecasts are – better: have to be – skewed to the positive for political reasons (politicians want to have an excuse not to undertake reforms) – in agreement with their Keynesian in-house advisors who do not want to shatter “confidence”. This, and the fact that currently all major European economies are slashing their growth forecasts, makes me somewhat sceptical.

Listen, I generally agree that the Greek government has undertaken steps in the right direction. After all, they faced what awaits all socialists at the end of the road: the end of other people’s money. This is why I have been long two Greek stocks (OPAP and Mettka) for the better part of the past two years. Under normal circumstances it might be straightforward to conclude that a more competitive economy means great prospects for the banking sector and there is the notion on Wall Street that you best “play” the economy by investing in banks. However: whoever came up with that idea (a long time ago, as it is old) did not face the current debt problem that still plagues Greek economy, as I will discuss next.

Einhorn seems to think that Greece’s high debt load (public debt @ 175% of GDP) is not an issue as it is owed to supranational (ECB; IMF, Euro zone countries) at below market rates and with long tenors. He then pulls out this chart that shows Greece’s interest rate burden steadily declining and compares this to the French figure. No doubt: it suggests substantial impressive improvements ahead.

Now, the question before us: how can Greece reduce its interest burden by almost 50% without repaying anything  – it still has a budget deficit, remember – and absent any new debt restructuring?

I got so intrigued by this chart that I even decided to look up the autumn budget forecast of the European Commission. On page 174 of the report you have the budgeted interest expenses for all Euro zone economies. I have reproduced the relevant section (Table 37) below: 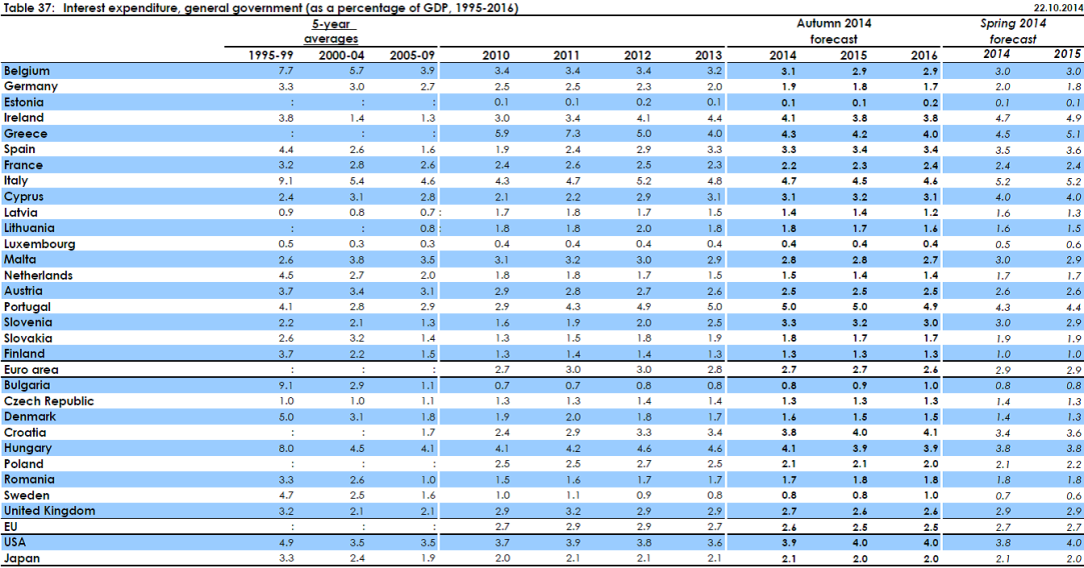 And there you have it: the European Commission forecasts Greece’s interest expenditure to come in at 4.3% for 2014 and at 4.2% in 2015 – twice the figure in the presentation. I repeat: this makes intuitive sense, since absent another debt write-off there is no way Greece can reduce its debt burden by the amount indicated by Einhorn. In other words: ALL the beneficial effects of the restructurings are already in the figures – sorry, it doesn’t get better than that!

Note that Greece (together with Italy and Portugal) has still the highest public debt burden of the Euro zone, despite the default and despite the generous terms on its debt.

Note also that Einhorn got the French figure (2.3%) right – chapeau 🙂

What do we make of that?

I do not hope/assume Einhorn deliberately wanted to convey a wrong picture. It is more likely that one of his many analysts made a mistake. Nevertheless, he should have noticed that this doesn’t add-up. Worse, the mistake is not merely academic, but has real implications for Einhorn’s investment thesis as it means that the Greek sovereign still has a massive debt problem, something which has to be addressed when talking about bank investments. Unfortunately, it is something he doesn’t mention further in his presentation.

So let me drop a few words on Greek sovereign risk, then.

Obviously, the high debt load indicates a high probability of another default. Although the debt is mostly owed to foreign non-private entities, this is not necessarily an advantage. With whom do you think you can restructure your debt quicker and in a more meaningful way: with private investors, or with the EU Commission/ECB/IMF? Clear answer, if you ask me. Apart from that, there are still the constant negative repercussions of a debt overhang: political tensions and public unrest are a constant danger, higher risk perception negatively affecting bank funding and margins another and, whereas Greek households might not own much Greek sovereign debt, Greek banks surely still have high direct sovereign exposures. But more on that in the next post…

After numerous restructurings and mergers during the crisis, four banks have come to dominate the Greek banking market with a combined market share (assets and deposits) of 93% among themselves. The graph compares banking sector concentrations in various countries to average ROEs implying high future profitability for Greek banks.

Mainstream economic theory grades markets according to the number of players operating in it: the more players, the higher the competition.

This is (mainstream) theory. What about real life?

In real life it is difficult to count the “true” number of players. You could have a lot of players in one sector, some of which occupy a niche in that market allowing them to still earn high ROEs. Alternatively, you could have only one or two players but competitive prices and average profitability. How? Well, they might be so-called “Contestable Markets” where the threat of another player entering the market keeps prices down. Airline routes are a classic example for the latter.

According to the Austrian School, a competitive market CANNOT be meaningfully defined by the number of buyers/sellers, as the classic perfect competition model suggests. What MATTERS instead is whether there is free entry/exit into a particular market. As value investors only know too well: without barriers to entry a business is poised to earn mediocre returns, no matter how many players…

How does the Greek banking market score on that goal?

As in any other country, you need a licence to open a bank in Greece suggesting the existence of a moat. On the other hand, Greece is in the EU and one of the pillars of the EU treaties is the free movement of capital. If Greek banks earn high ROEs, this can and will attract other European banks to open a subsidiary in Athens and start earning high fees themselves. It is even conceivable that foreign banks enjoy a funding advantage, due to a better reputation, as is the case for Austrian banks in some CEE countries. This isn’t going to happen in the near future, but it doesn’t look like a sustainable “moat” to me.

Wait, but what about the banks in other countries such as Belgium, Sweden and UK? Don’t they earn high ROEs?

Unfortunately David Einhorn doesn’t provide details of how he computed the average ROEs, a crucial information – especially for bank financials.

First: did he use last year figures or cyclically adjusted ones? Credit risk is a heavily left skewed distribution which means that one or a few particular observation don’t tell you much. Since bank management has more discretion about managing the numbers than in most other industries a particular annual figure is even more meaningless.

Second, if he uses some kind of historic average (better), he faces two major obstacles:

Two of the countries (UK, Belgium) on the slide saw large-scale bank defaults during the last crisis. Dexia and Royal Bank of Scotland RBS come to mind. In both cases equity investors got wiped out. Others (like Barclays for e.g.) got bailed out, i.e. equity investors were spared,  something which I think will not be politically feasible next time. This makes historic data somewhat unreliable even if cyclically adjusted correctly.

Sweden and Australia had no major bank defaults during the last crisis (Australia didn’t even have a crisis as it profited from China’s mad construction spending binge). Fine! But there is another thing they have in common: their private debt levels (not government debt) have soared over the past two decades. According to the Geneva Report on the World economy, the private debt levels for the Swedish and Australian Economy stand at 252% and 180% of GDP, respectively. Compared to these figures, the famously levered US private sector looks thrifty in comparison (@160%). In other words: a debt crisis and mean reversion of those high ROEs are likely to happen sooner or later. Interestingly enough, in Spain, a country which also had a much-touted low public debt load before the banking crisis hit, private debt stands at 209% of GDP – right between Australia and Sweden.

Calculating bank profitability can be tricky as I have outlined above. Almost all of Einhorn’s oligopolistic markets have experienced an Alice-in-Wonderland environment over the past two decades: high debt growth and government subsidies that have skewed historic figures. It is difficult to see how this favourable scenario will repeat for the Greek banking system (and for all others) in the future. Therefore, I feel that the substantially lower ROE (14%) of the Czech banking system is probably closer to the truth – and even that strikes me as optimistic.

In the next post, I am going to discuss bank specific statements made by Einhorn…