I have been on the road for the past two weeks, visiting Beijing for business. Since WordPress does not work well in China (neither do Google, Facebook or Youtube) posting was difficult. As you can imagine, given my bearish view on China, I was extremely excited about this trip to see how a credit bubble feels like. Of course, I am aware of the fact that the capital doesn’t necessarily convey a realistic picture of a country – but better than nothing. In this post I want to share my observations.

I arrived in Peking in the morning. As expected, the airport was huge and empty, although I liked its design. You can imagine my joy: “… my first white elephant: a huge, empty airport – that’s what a credit bubble looks like…,” I said to myself.

Alas, no such luck: we had merely been the first plane that had been allowed to land due to the heavy smog. Oh, and the rest of the week I had blue sky and sunshine – an absolute rarity in Beijing.

Beijing is a modern city, the infrastructure well-developed with huge roads and bridges, airports and train stations. I was told all Tier 1 cities in China look like that. I occasionally stumbled across an empty skyscraper. I had the feeling additional infrastructure is the last thing China needs. House prices nevertheless are ludicrously high. An apartment in the business district (a huge area, probably comparable to large parts of Manhattan in size) sets you back about USD 18.000 / sq m. Rents are way higher than in Vienna. Despite the huge roads there are large traffic jams and German cars are ubiquitous. The city government was planning to restrict the number of cars and they did: they restricted the number of – Taxis!

And China is not cheap. Eating out is fairly cheap, yes, but the quality of ingredients is, ahem, highly volatile. European products cost 2- 3 times more than in Vienna, Starbucks and Mc Donalds about the same.

Being used to European politicians’ empty promises, I had thought that the vows by the new prime minister, Li Keqiang, to tackle corruption were nothing but empty words and a no-show to please concerned Western observers. I was proven naive. This guy means business. I heard many stories about how a company got into trouble because the CEO was arrested out of the blue and questioned for weeks, presumably to provide information on corrupt local politicians. Often this left the company paralyzed as it was without its main decision maker for weeks. In short, a lot is going on under the surface causing quite a stir – some even compared the current period to Deng’s market reforms 40 years ago.

Fortune Asia had a good article  (“Beijing pulls back the welcome mat“) about how the new government behaves more aggressively towards foreign companies many of which have been accused of “monopolistic” behaviour and who see their fat profit margins under threat. This is underreported in western media, but a big concern to many foreign executives.

Of course, tackling corruption, while sounding nice, doesn’t mean the country is becoming more “western,” transparent, or anything like that. I had the impression that “reform” just means replacing one entrenched elite with another one. Economic policy goals may change, but not the main rules of the game.

The power of the state

What was really surprising to me, though, is the degree to which the state exerts power in China. Russia felt like child’s play in comparison (except for the oil and gas sector, probably). Private companies are at the mercy of the state to a degree I haven’t seen anywhere else.

For instance, the next APEC (Asia-Pacific Economic Cooperation) will be held in Beijing in the beginning of November. In order to present a smog free skyline, the government will force surrounding coal and steel companies to substantially reduce their output prior to the event – no matter the cost.

Interestingly, some of my Chinese sources mentioned that laying-off people is not that easy in China as riots are not unheard off and “social stability” ranks high on the list, which doesn’t sound like a highly competitive labour market to me. Since the obvious cost advantages have disappeared (China is NOT cheap) and the economy slows down the rigid Chinese labour market will be put to the test. Extrapolation of the stability of the past 20 years would be a serious mistake. I expect serious riots as the overcapacity in various industries starts to bite…

Liquidity crunch and the banking industry

One of my major goals was to verify to what extent reports about the liquidity crunch and the fraudulent activities at the port of Qingdao were accurate. And I have to say that the information on the ground (expats and Chinese working in banking) pretty much confirmed what I had read in the media. I also asked about the famous city of Ordos and it apparently really exists, people, not just finance guys, know about it. Especially the liquidity crunch was a topic of great concern in some regions and has hurt many a company forcing the government to step in and provide liquidity, which in China means the goverment tells the banks -private and state owned alike – what to do. Listening to the stories I learned a great deal about Chinese banking industry specifics.

Any discussion about China’s banking system has to start with the fantastic book “Red Capitalism“. The authors, two American Investment bankers with more than 25 years of experience in China’s financial industry, brilliantly describe the sinister workings of China’s financial system – a must read. It has been a while that I have read the book, but I do not remember that the authors mention the topic of cross guarantees. They should have, as guarantees are pervasive throughout the system and played a crucial role in the recent liquidity crisis. Nothing comparable exists anywhere else so I will briefly describe it as it is necessary to understand what happened.

It is a custom in China, I was told, that Chinese banks require a guarantee from another party before granting a loan. Just for the case.

“Why would any company provide a guarantee to a third-party?” I hear you ask.

Answer: Well, simply because the guarantor himself has a loan and needs a guarantee himself. In other words, if you want a loan you have to play the game. Note, that this has NOTHING to do with shadow banking. The system is official and guarantees have to be reported to the central bank. As a consequence of this habit, the rationale behind which nobody could explain to me and which most likely is a remnant of some rule which probably made sense in a distant past, most indebted Chinese corporates have issued substantial off-balance guarantees to third parties – often  a significant percentage of their equity, with the consequence that on balance sheet information is not very informative for most Chinese corporates. Sometimes it is even tricky for the banks to appropriately rate the company in question. With that information, it is easy to see how a liquidity crunch at one company can spread like wildfire: all you need is a minor default and the cross guarantees start kicking in which is exactly what happened at the beginning of 2014.

Given the fact that M2 has grown by more than 1000 (one thousand) percent in China over the past 14 years, it is no surprise that defaults have been rare and the negative effects of the cross guarantee system not yet exposed. I expect to hear more about cross defaults as the money supply growth slows down further, as the following chart (via FT Alphaville) shows, 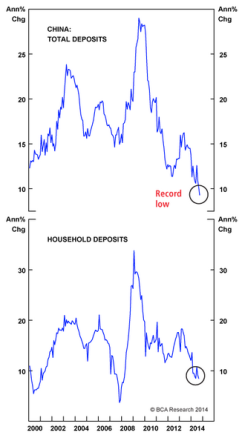 The new Chinese government is a big force of change that is underestimated in western media. It is also behaving aggressively towards private and foreign companies and, given its power, it is safe to assume that profit margins have peaked for western companies in China. While I can understand China bulls’ enthusiasm for the country – those huge infrastructure buildings and skyscrapers are impressive – I absolutely cannot see how the demand for raw materials and energy can continue at the pace of the past two decades. Who will buy all that steel and concrete? Beijing needs clean air, the rest is already there and in size.

The liquidity crunch caused great havoc at the beginning of the year and serious damage could only be prevented by granting liquidity lines. Like every government in the world, the Chinese government probably believes/hopes this is merely a liquidity issue. Overcapacity in most sectors, however, suggests that we should think in solvency terms. Due to the cross guarantees across the system, a small default can have large impact. Consequently, the system is fragile both ways: a lot of companies are insolvent and the financial system is opaque – a toxic combination.