I have been short the Australian Dollar (AUD) since 2012. Initially, I have made some money, but in the past few months it has been painful as the cost of carry is high (4%). You will not be surprised to hear that the reason for my bearishness is the Chinese bubble: it is well-known that no other country has profited from the China boom as much as Australia whose exports to China are up from 5 percent of gdp in 2000 to more than 35 percent in 2013!

As the chart below shows (via ft-alphaville) iron ore has been the biggest contributor to Australian export growth, followed by energy – all things China needs. 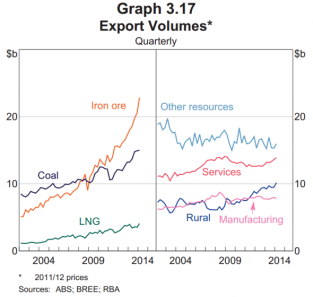 Iron ore demand has virtually exploded post 2009 as a result of China’s investment binge. Note that the increase in volume has more than made up the fall in iron ore prices, which is probably why neither Australian miners, nor the economy have yet felt the pinch from falling prices and the Chinese “slowdown” – simply, nothing has happened yet. By the way, despite the heavy fall, prices are still way above the long-term average.

According to Austrian Business Cycle Theory (ABCT), those sectors that are most removed from ultimate consumption benefit the most during a credit boom. Due to the long-term nature of these projects interest cost is a relevant cost component, which gets lowered during the boom and hence ignites heavy activity. Needles to say: these sectors also disproportionally fall during the slump.

Now, there are few things further removed from consumption than mining. The credit boom in this case is China’s lending binge and the most remote sector impacted by the binge is the mining industry, which provides the main input for all that steel that goes into the empty skyscrapers. And in Australia’s case the whole economy is a derivative of the mining boom. China is the main reason why there has not been a recession in Oz for the past 20 years – not some superior central bank management or “growth model”.

Due to the steady demand for Australia’s raw materials, the demand for the currency has been high and manufacturing plants are closing, which is why I think Australia has caught what economists call a “dutch disease,” at least that’s what the following chart measuring the competitiveness of various developed economies suggests. Australia is even more expensive than Norway! 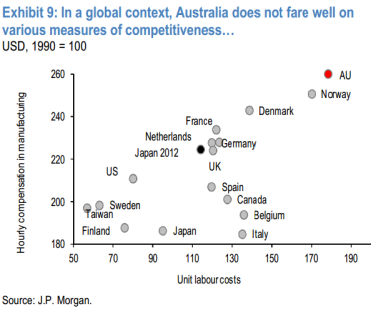 Once the Chinese start building less skyscrapers and infrastructure Australia will be hit very, very hard!