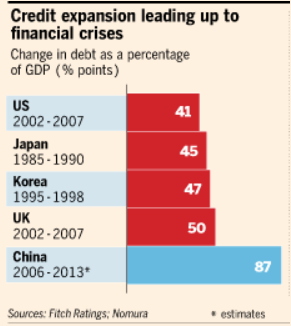 In a fractional reserve banking system, debt expansion usually means money supply growth, i.e. the classical definition of inflation. Note, that under the old definition of inflation it doesn’t matter whether you include or exclude asset prices from the basket of goods. Baskets are always arbitrary and subject to manipulation – see Argentina for a recent example. According to Austrian Business Cycle Theory, a rising money supply leads to malinvestment as manifested by a distorted capital structure in the economy. Malinvestment means there is to much of what is not needed by consumers and too little of what is needed.

China bulls probably would remark that china is different because it controls interest rates, capital flows, has many reserves etc. I do not know whether proponents of this theory realize that their view implies that there is no universal economic theory. Just as marxists differentiated between bourgeois and proletarian logic, thereby denying that political classes could understand each others viewpoint (“das Sein bestimmt das Bewusstsein”), a host of people seem to think different laws apply to china because it is run by chinese (in all likelyhood they are not familiar with the theory either).

Given the size of its economy, the unravelling of this house of cards will have tremendous global implications – not only economical. Our views of how states should be run, will similarly be impacted.